Pictures From the Fringe: 2007 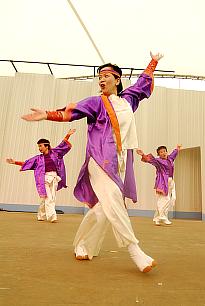 This was the first Fringe for which I am "officially" a Fringe photographer - specifically for dance. In 2006 I gave The Fringe a few pictures from Kacico, Nikoria and another event. Those pictures found their way into a feature with "Urban Times" about the Fringe. In 2005 I remember getting asked about The Fringe but schedules fell through. This year I did shots for the fringe preview the first friday in July. For the main event I put together a very tight schedule to get every dance act.

One dance performance I didn't know about until I ran across it while going to another event. Etre Art didn't say "dance" anywhere in the participant description. Nothing about "dance," or "musicians" or "mime." Anyone (read me) looking for dance wouldn't have a clue: "Sculpted bodies that shape sensual space" instead of dancers. Well, maybe dance do "shape sensual space" but I was looking for a particular type of performance. I didn't think to search for "sculpted bodies that shape..." Okay, that is all I will harp on the description because once I spotted the silk aerialist (Audrey Rusher) I knew I wanted to see the whole Etre Art performance. It took three tries.

Anyway, I created a dance-only schedule for the Fringe and listed the Fringe dance schedule to my calendar on KCDance.Com. From that dance-only calendar I worked out a shooting schedule so that I could get every act. It pretty much worked out except for one I didn't get at all and one I almost didn't get of our visitors from Kurashiki. And after a long weeked of dance pictures, lots of good action shots and great aerial moments the one picture, no fast action, which grew to trump all the shots was a quick little posed group grab shot with one of the Kurashike dance groups of "grannies," parasoles and costumes which reminded me of leprechauns. Find it below.

In most venues the lighting left a lot to be desired for a camera. Usually lighting was a combination of inadequte to uneven or just plain spotty. Most lights seem to be PAR 64s and they are often underpowered and spotty. Most of the venues would have been better off using some cheap and simple hardware store floods (usually sold for chicken coops). They may not look like pro studio equipment but the light is broad enough and overlaps enough to provide good illumination.

So okay, I haven't told you yet but into this busy weekend I have grading to finish for my two courses this summer at UMKC. Then, this is the main annual weekend that my Nebraska family decides to visit. Each year they drop into Drury Inn, hit the pool, go shopping in Independence, go to the game and go home. I could persuade them to change and come the The Fringe so we do a late lunch at TGIF in Independence, then I look at my watch. Oops, I have to catch Kurashiki. Except...

The schedule for Kurashiki isn't quit what I thought - again. The performance I show up for is the chorus. Nice cute kids with those Japanese school-kid uniforms right out of a movie but no dancing. The dancing was the earlier performance, while I was eating lunch. Argggh! Next up, Just Off Broadway (JOB) for "Paper Thin" by Meta-Kinetics. For this one Jennifer Medina also asked me to do video. 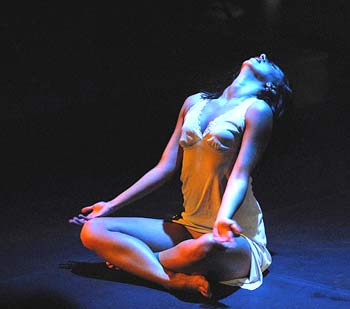 I arrived at JOB early (Kurashiki wasn't what I thought) and set up two camcorders at opposing corners of the center seating section. I decide to let one of the camcorders work on automatic, something I almost never do, but I am running it at a far corner. The other camcorder will be hands-on. It doesn't look too bad until the show starts. One of the problems coming into a show cold, without attending rehearsals, is not knowing what is coming first. It was darkness.

Now everyone who shoots photographs understands that it really helps to have so sort of light. The very word "photo-graph" means to draw with light. But the first two pieces were so dark that I know I will have to redo it the next day when I can have Nicole's help to run a camera. Otherwise I gnashed my teeth and shot anyway, stills and video. The video is worthless and the stills are limited, badly. It is not like I have control over the light. Boy, would my lighting look different. I will have to re-shoot Sunday.

After Meta-Kinetics I have to tear down fast and head for The River Market to catch Etre Art. This will be my third try for Etre and this try proves the charm.

I finally get really good stuff from Etre. Aerial, ballet, hip hop, and some etcetera thrown in for good measure. Also violin and mime but I (as usual) concentrate mostly on the dance. This time I have plenty of light, albeit almost directly into the camera from the very late afternoon sun. But that is really the kind of light I prefer. Light from over my shoulder is usually too flat to be interesting. The other nice part about this much light is that I can actually use a lower ISO (sensitivity rating) and a higher shutter speed with a smaller aperture - three good things.

First, before the dancing starts, I work the edges of the area to get a feel for the right exposure (remember, I almost always shoot in dark locations. I am so used to shooting in dark places I almost forget how to shoot in sunlight or other bright-light situations - sort of like those fish or shrimp shut away for millenia in dark caves who lose their sight but "see" in other ways). Once the dancers start, right away I am getting shots. They feel good and I know I am getting the peak moments for almost everything. I am missing or late on very few.

Albert Burnes and Micah Clement were doing a hip hop routine. I've known Albert for several years. After this performance I was eager to meet Micah. Micah did a backflip into my position. As he comes over the top, holding on to his hat he spots me and pulls up short, just touching. It made a great shot. I didn't move a muscle. The shot was too good. I just kept my eye in the viewfinder and clicked. I call it "Micah Over Albert" (see above).

Then comes the silk aerialist - Audrey Rusher (www.audreyrusher.com). Audrey was performing when I came by thursday night not expecting to find a dance event. She was barefoot on brick (ouch!) but her feet still looked fantastic. 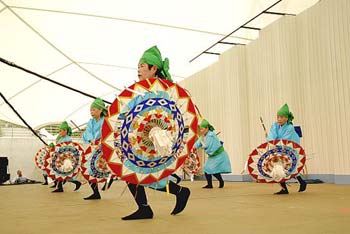 Kurashiki - I finally get to shoot the dancers. Although this is a performance on stage this struck me as type of social dance. The dancers were clearly community members fro Kurashiki who danced together as much for a chance to perform traditional dances as for a chance to meet and share time with each other and in this case to meet people in other countries. On stage they were sharing their culture with us. Off stage they were sharing time in Kansas City, sister city to Kurashiki. They reminded me of so many other dance groups which are really social groups. Dancers who may not be Broadway pros but they certainly share who they are with all of us and their lives are truly danced. 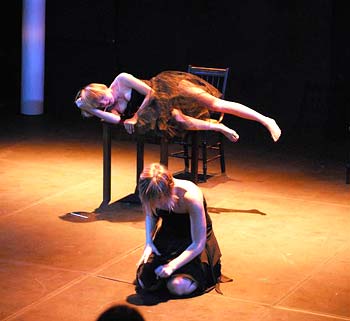 Meta-Kinetics - back for the second time. This time both camcorders are human operated. Me on one, "stage" right far corner just off the audience and Nicole top right in central seating. As the show starts it is clear the lighting has changed. Everything is much brighter. The second piece, Jennifer's is still much darker but I can get a visible exposure on the camcorder and so does Nicole.

As it turns out the lighting change was chance. Some of the filter scrollers weren't working right and so the lights were a stop or two brighter than the night before. Now I have usable video. Also more stills, and from down close. Whew! After the show we stay for Go Go Girls. Nicole had wanted to see it and I wanted to get pictures from earlier in the show that I wasn't able to get previously.

This time I had a chance to intro myself and watch the show from the start while looking for pictures. Not depressing, as I originally feared. Although it was a bit mono-toned. Still it didn't last too long and I had to leave early anyway so that I could head back to process the last on-scene pictures in order to hand in a set of selected pictures to the Fringe for that day. After I delivered the last disk with pictures I headed back. I had grades to finish.