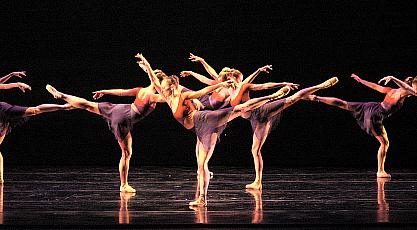 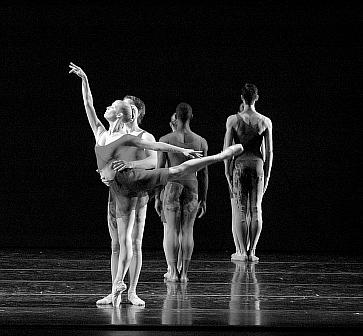 Patrons gathered at the Lyric Theatre Oct. 6-8th to view the Kansas City Ballet's "Imagination in Motion Fall Performance". This the KC Ballet's first concert of the 2005-2006 season, which is dedicated this year to the memory of its founder, Mme Tatiana Dokoudovska, who passed away Sept. 21st at the age of 84. A memorial display was also available for viewing in the lobby of the Lyric during the concert.

The concert presented a variety of classical and contemporary ballet, including a colorful, whimsical ballet, repeated by popular request. The performances were presented in three acts with intermissions. 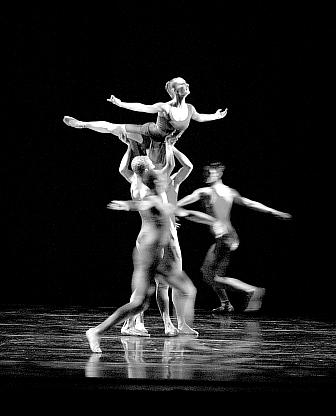 The first act was the "Stravinsky Violin Concerto", choreographed by dance great, George Balanchine, who said several times that this piece was his favorite ballet. It is a mix of classical and modern ballet, which is just as fresh today as when it premiered in 1972. Performed crisply and precisely by a well-tuned ensemble in simple ballet class attire, this piece rounded out a series of Balanchine pieces that Artistic Director, William Whitener, envisioned for the company.

"We have been steadily working our way through Balanchine's ballets," he said. "This was the next logical selection."

Heralded as one of the world's foremost choreographers, Balanchine has left an indelible mark upon the field of dance. In fact, U.S. News and World Report commented in 1970 on Balanchine's career, stating that he is: "The greatest choreographer of our time, George Balanchine is responsible for the successful fusion of modern concepts with older ideas of classical ballet.” 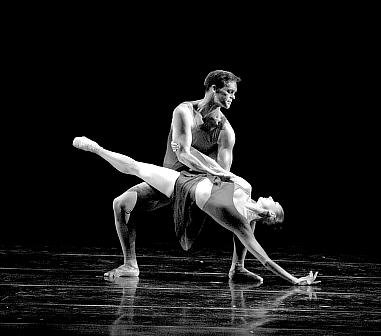 The last movement of this modern ballet, the Kansas City Ballet in its spring concert of 2003 premiered “Canzonne II”. This concert gave Weber the opportunity to present the ballet in its entirety.

Dramatic and colorfully garbed, this piece featured unexpected moves, athletic lifts, and dangerous throws that literally took the audience's breath away. Murmurs of admiration could be heard from the audience during intermission and after the concert.

"It is the best work she has done, by far," said one audience member.

"The way she plays with balance is amazing," said Conservatory graduate student, Christine Walker. "The choreography is so risky and surprising, it makes you hold your breath...!"

"It was imaginative and breath-taking," echoed another patron. "Yet it flowed so smoothly... it was flawless." 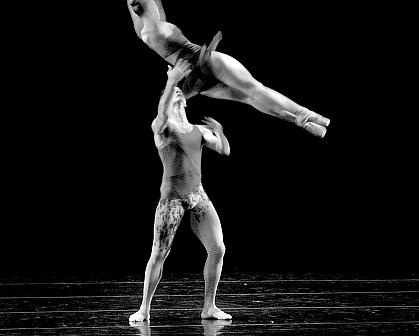 The third act featured a whimsical ballet called "ZuZu Lounge" that was a hit with younger and older audiences alike. Choreographed by NYC dancer, Margo Sappington and set to the retro "space-age" music of the late Juan Garcia Esquivel (known for his "lounge" music), this ballet presents a humorous narrative of the age-old love triangle among... bugs. Featured insects in the cast included ladybugs, fireflies, moths, beetles, spiders, and a preying mantis in a delightful parody of the cocktail party life-style.

Sappington is a seasoned performer and choreographer who has worked shows on the NYC Broadway stage and in the Joffrey Ballet. Under her experienced hand, ZuZu Lounge experiments with a fusion of popular and modern dance techniques with classical ballet.

Originally, it premiered with the Kansas City Ballet in February of 2002. It was such a hit when it premiered that it was brought back this year by popular demand.

"It was the treatment of the music that attracted me to the project," said Sappington referring to Esquivel's complex, and sometimes eccentric, music.

"It was so cute," commented audience members after the performance. Children, not just adults, seemed to particularly enjoy this light-hearted piece.

The concert seemed to flow in an almost flawless manner despite the challenges the company faced in putting on the production. Shortness of time and a number of injuries threatened the company's performance, but did not mar the final presentation. Dancer Christopher Barksdale, for example, was on crutches for the first two performance nights due to injuries, but was able to perform in Sunday's concert.

"Considering that we have a number of injured dancers, and we did not have a lot of time to put the program together, I think they managed beautifully," said Lisa Thorn, Associate Ballet Mistress.

This was also reflected in the comments of Artistic Director, Whitener. "I think they did particularly well with this performance," he said.

Nancy Murdock, 10/28/2010
Hey Mike: Nice photos of the ballet! and thanks for sending me the cd of our tap performance.Nancy