Kacico Dance at the Folly - October 2005 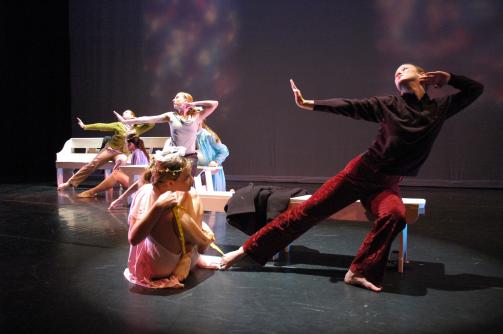 (Kacico is pronounced KÄ (as in cat) see coe )

I always like it when a fresh face emerges. Kacico is new and this was their inaugural performance, at the Folly Theater in downtown Kansas City. I was hired to shoot pictures at the dress on Friday. I came back to shoot later at performance on Friday.

They were still marking positions late Friday but Kacico pulled off a show by 8pm anyway. There were some signs that Kacico is still a tad green as a performing company. But they went for it and you could see the shape of a developing core to Kacico.

But this was not a safe and easy program even for an established company. Michelle Diane Brown put together a wide-ranging, ambitious program which was varied and inventive. The choreography varied from abstract to story telling, from down to earth to celestial from urban to nature.

The lighting was also superb, most of it done by a couple, Lisa Weinshrott and Michael Kimmel who have been lighting stages together for the last four years and longer than that as individuals. From my time in dress rehearsal I can tell you the lighting was also a work done in detail including attention to all the lights used off stage. In all it was worth the night and we got to see the concert start for a new company. 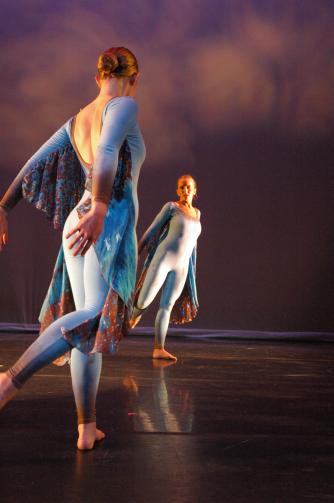 Bobbi Foudree (left) and Lindsay Spilker in "Above Morning" as butterflies

Michelle Diane Brown has been working on the sidelines since leaving "aha! danse theatre" a couple of years ago, doing individual performances and planning to setup her own company. In last year's Dance in the Park Michelle performed a joyous tap number with Malinda Crump. Over this past year Michelle Brown has been putting together the organization, funding, training and scheduling for Kacico.

She managed to attract several former UMKC dancers who are dancing with several companies. Through the spring and summer of this year Brown has been booking Kacico to a series of outdoor, audience participation concerts at fairs and community events as a way to spread news of Kacico, gather mailing lists and funding as well as to provide performance experience as a company. All vectoring into this performance at the Folly which was booked very early on, well before they had their dancers picked.

What is clear is that Brown has been planning not only the involved choreographies but also the course of development for her company. It would be a mistake to look at this concert as either a culmination or a badge of legitimacy for Kacico. It would be, I think, more accurate to regard this Folly concert as a planned stage of development for Kacico.

That is why although I note that there is still some green to the company, I prefer to focus on the imagination and scope of this production. Frankly I am impressed at the planned trajectory. You can almost feel where they are heading and I expect them to get tighter but I defy anyone to predict where Brown's imagination will take her choreography. 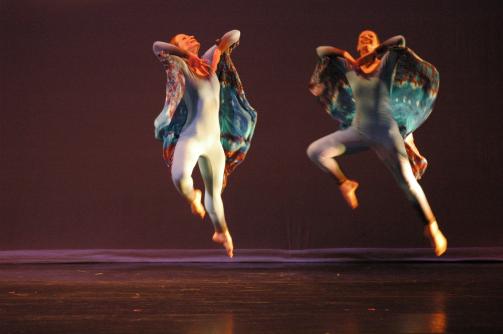 Lindsay Spilker (left) and Bobbi Foudree in "Above Morning" as butterflies

Kacico pages on this site: