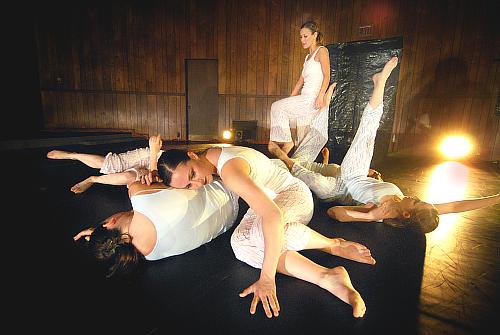 My spine was electric and tingling in meditative yoga but I wasn't meditating and it wasn't yoga. I was shooting video at Kacico's fall concert and the piece was second in the show, "Forward Progress."

"Forward Progress" is a long (22 min) piece of repetitive undulating motion to smooth pulses of music by .... ..... Michelle Brown had noted the length of the piece in her opening remarks. Usually I consider pieces without a story narrative to work better when shorter. And, when I am on camera at least two things happen to separate me from full involvement with the piece: 1) technical concentration on the camera operation and 2) seeing the stage piece through the tunnel vision of the viewfinder. Yet, this piece caught me at the start.

Despite the imposition of the camera, and the hardness of the metal chair I was shooting from, "Forward Progress" became a personal-participation piece, without leaving my chair or having dancers invade the audience space. The dancers began upstage in a line-abreast formation. As the music surged, they surged in a turning step toward the audience, then back a little, in a wave motion, like a tidal pool. This was repeated again and again, forward a long distance, then back a short distance and so on until they finally reached the audience. They could have been waves lapping against a shore as a tide rose, bringing the water ever closer up the beach, to the audience.

Twenty-two minutes of this. When they got to the audience, the dancers began a cycle, moving back upstage and then returning downstage toward the audience. Sounds repetitive. It is. Sounds as though you would really get fidgety. But you didn't (speaking for myself). Instead the repetition became a connection which reached deep inside creating a meditative experience. Not unlike whirling Dervishes, except that these were surging Dervishes (so to speak). The fuzzy, electric tingling feeling moved up and down my spine. Had I not been on camera, I have to guess it would have been enveloping for me. It reminded me of my first experiences years with meditation in yoga. Only this was much more active.

For that matter, thought it wasn't intended as such, I saw Newtons First Law of Motion in a similar vein to some extent. Not because of an undulating motion and music, but because of a repetitive theme in movement and reaction.

So, after a few short years maybe I am beginning to catch on. I'm now thinking that Kacico is not about dance technique first and foremost, or at least not so much as it is about an inner experience which is generated by watching rather than itself being a watching experience. Maybe I should be careful not to give the impression that Kacico is somber or "churchlike." 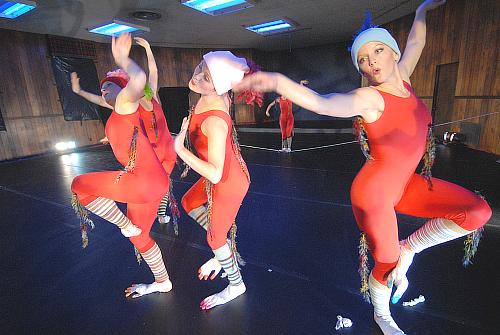 Michelle Diane Brown's pieces are often humourous. "Breezy" has the dancers dressed in red bird costumes with clownish bird feet, a few hanging feathers and even outfitted with a couple of bird droppings which get left at the front of the stage. The birds clop around in waddling fashion, making funny rubber-rubbing noises and gathering at a large fan at the far downstage stage right corner. "Sisters" has the full troupe interacting on stage with sister relations including fights. (treated lightly).

"Seventeen" is humorous (from a certain indulgent age perspective) and serious (again from a "certain" age perspective) and taken serioiusly from a perspective at 17. "Seventeen," derived from Brown's own experience in raising teenage boys though that year the female soloists (Allison Kaut and Lindsay Spilker Tate) display the violently contradictory mood swings of a young person alternately yearning to break free of their parents and just as intently to be shielded from adult responsibility and remain cocooned. Brown warns her audience that "adult" language will be used. As the 17-year old character of Brown's narrative uses profanity laced language to express the adult side trying to hatch out I have to reflect how we use the term "adult language" to express lack of restraint which is tolerated because of age as adult rather than behaviour which is thought out in terms of consequences and effect on others as "adult."

Kacico pages on this site: