Nritya presented five individual dance pieces by various members of Nritya from the adult dancers to the smallest children dancing.

After those five pieces a short intermission with drums and then the drama in dance:
"HOW GANGA CAME TO EARTH"

"How Ganga Came To Earth" is a version of the Ganga myth for dance, in eight scenes. This is a legend which recounts how Ganga, the water goddess, was persuaded to come to earth from heaven. Ganga was once exclusively the river of the gods. The story includes kings, queens, 60,000 sons, a good father and a bad son, a meditating sage with a temper and fatal fiery gaze. 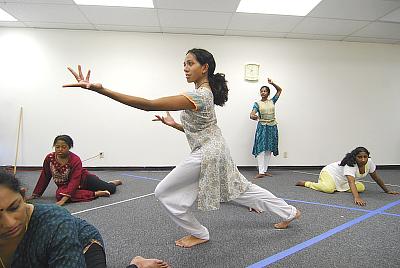 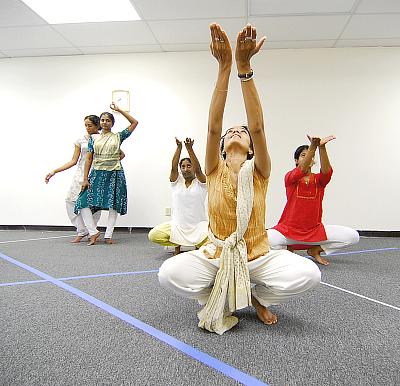 "How Ganga Came To Earth"

It begins (as do so many myths) a long, long time ago. A king has two wives. One bears him one son (who becomes a not-so-nice king in turn). The other wife, Queen Sagari, bears him 60,000 sons. They become an army. To consolidate her position as empress she sends out a horse with these 60,000 sons. The reception that each area gives to the horse is a way of affirming her leadership or taking sides against her.

Indra, King of the heavens gets word of this and, worried, (I'm not really sure why) decides to capture this horse and hide it in Sage Kapila's ashram. When the 60,000 realize they've lost the horse they pull apart everything they can to find this horse. They locate it in Kapila's ashram and accuse Kapila of stealing the horse. Kapila, who knows nothing of the action by Indra, isn't happy at being accused of having stolen the horse. Being a powerful sage type, Kapila gazes in such fiery anger at the soldiers that all 60,000 are incinerated instantly.

That starts a long process. The queen's daughter, Madhulika, sets out to look for the soldiers. Along the way she encounters many types of Indian dance (well, this is a dance concert). Finally she finds out the terrible fate of her 60,000 brothers. Remember, this is a myth, so although Kapila's fiery gaze incinerated all 60,000, this is really just a curse and the waters of Ganga can revive them. But not unless you can get the waters to earth to wash over their remains. This is a bit of a problem because the waters of Ganga are in heaven. This requires a lot of penance on the part of the queen, and six generations of her descendants - (Indra, who caused this, somehow gets away scot free).

Eventually we get to a ruler named Bhagirathi. As she begins to do her pennance Lord Brahma tells her that to cure the curse she needs to get Shiva to hold Ganga's force at bay, by trapping her waters in his locks. Shiva agrees to this and then Bhagirathi asks Shiva to let a little of the water free to come to earth so that it can wash over the cursed soldiers. And, this, finally, breaks the curse reviving the previously incinerated army.

So there you have it. I have to admit a partiality to stories of this type. This is the type of folk story which has charmed and entertained us since childhood and entertained humanity since before written words. I also like the concept of narrative in art. Narrative has a way of holding your attention, almost regardless of the story itself, and in ways that non-contextual performances often lack.

Kathleen Moy, 1/18/2010
Hi! Interested for my 12 year old daughter to take classes on sundays. What is the cost of the class and can she try a class for free to see if this is something she would be interested in? And what is your address? Thanks!