Eight couples lined up on the stage at the GEM to dance for a share of the $1,000 total in prize money. Overall, the event moved between the Jazz Museum on the north side of the street and the GEM Theatre on the south side of the street. The pre-party with dancing was in the museum. The contest was in the GEM, on stage. The after-party moved everyone back to the museum floor and more dancing overall. 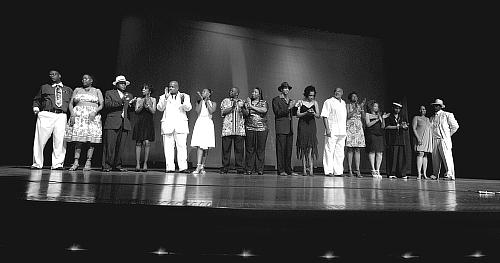 All eight couples lined up on the stage prior to their competition.

The onstage competition began with the contestants moving across from the Jazz Museum to the GEM and getting briefed. Then the crowd migrated across the street and found seats in the theater. At 9:30 Tony G, Hot 103 Jamz radio DJ stepped up to the podium as host for the evening. 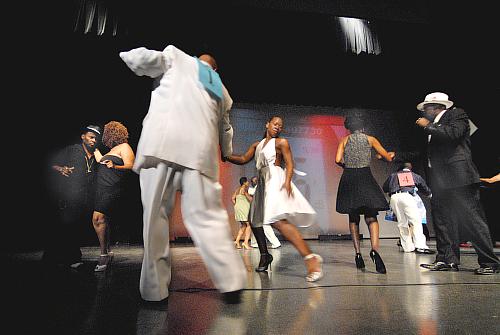 On-stage all couples at one time, at the start of the competition finals. (front) Curtis Parker and Cassandra Harris-Jennings, (behind them, left to right) D-Mann Thompson and Carmen McGee, Leo Franklin and Liz Hinsen (partially hidden), Bobbie Tuggle and James Cole (and between and behind Bobbie and James) Nathan Mack and LeAndrea Allen (the eventual winners).

The couples were introduced one at a time until all eight couples were lined up on stage (picture above). Then all couples danced together in a single large group. After this they were broken into two groups of four couples each. Those two groups competed leaving two couple from each group to go on to form the final group of four. 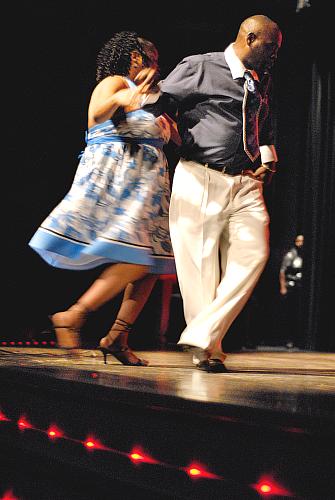 LeAndrea Allen and Nathan Mack Sr, the eventual first place winners, sharing $500.
They won second place in 2005 and first in 2003.