Re-printed from the September 1997 Issue of infoZine! online magazine
Pictures and text and formatting are dated to Sep'97.
Some links have been updated.

Everyone Wants to Dance
What Dances are Practical?
List of Links you might like to use:
My dance partner and I had been dancing on broken, rough, wood decking and on broken concrete driveway at the back of Blayney's to a rock band. We were ready to head for another club so we ducked inside to walk to the front of the popular Westport nightspot. The 39th Street Blues Band was playing and no one was on the small dance area in front of the band. Jewell and I looked at each other for a second with a "we gotta dance" look and decided to stop just long enough to get in one dance before leaving.

When the music stopped we turned to go and were met with applause and high five’s. For our dancing! We were both amazed and a little embarrassed. I whispered to my dance partner, "Let's get out of here before some real dancers show up and blow our cover." We were beginners - pretty much still are. It wasn't so long ago that the idea of getting on a dance floor, with everyone looking at us dance, would not have happened. Now other people in the crowd treated us as if we were exhibition dancers. 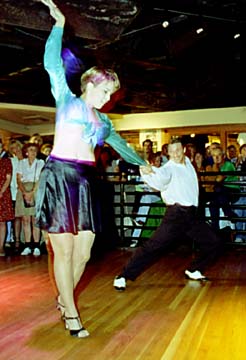 Had there been exhibition-class dancers also dancing the crowd would have known better. But we were asked by several people where we learned. At that point we could only say that we both belonged to the Kansas City Swing Dance Club and tell them to look up the club in the phone book. The lessons and membership were both dirt cheap and good. After getting a couple of more responses similar to the one at Blayney's I decided to write down some brief information to hand out. Eventually that information turned into a web page.

Top
Everyone Wants to Dance

The response at Blayney’s and similar responses from many other persons in nightspots tells me that clearly many persons would love to get on a dance floor and do genuine partner dances. Musicians appreciate it too. We’ve had a number of musicians give us compliments both directly and from the bandstand. We’ve been told that it is nice to have someone "dance in time" to the music. If you like to tap your feet or drum your fingers or clap your hands to the music you are already dancing. Now it is time to add in the rest of your body to the dance. 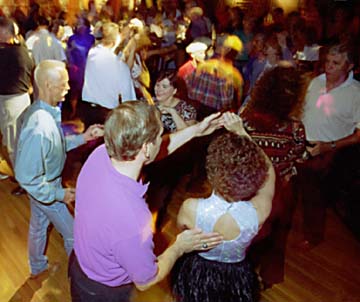 It isn't as hard to learn dances that are useful in nightspots as you might think. When we got applauded at Blayney’s we had been taking group lessons for only a couple of months. You don’t have to sell yourself into indentured servitude to pay for lessons. You do have to give yourself the time away from the television to take the lessons.

Lessons divide into two major categories: group lessons and private lessons. There are various overlaps between these two categories. Group lessons (when charged for separately) are the least expensive, ranging from $3 a session to about $6 or $7 a session. Both of the two swing dance clubs in Kansas City offer group lessons as their only lessons (though specific teachers may also offer private lessons separately). Walter’s Dance Center in KCK has three regular nights a week in which they give ballroom group lessons.

Private lessons are the expensive variety, ranging from $45 to more than $60 per hour in the Kansas City area. These are either given by individual teachers or dance studios. Private lesson plans can also be grouped into contract and non-contract plans. Some private lesson plans include a number of group lessons which can be taken at your discretion.

Top
What Dances are Practical?

So what dances do you learn for nightclubs? Opinions differ but tend to center around a base of swing, fox trot, waltz, and two step. You might also add in the cha-cha and the rhumba. If you intend to dance in Latin clubs definitely go for salsa and merengue. The two step is a definite if you prefer country music. The Fox trot and the waltz are standbys which can be used directly and which are also the basis for many other steps. They could be thought of as a "classical" foundation for most other social-dance steps. 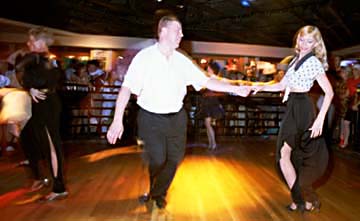 If you want to learn one dance for general all around dancing in almost any club with most of the music you will encounter, go for swing. Swing comes in a wide variety of dances and can usually be danced just about anywhere. The two major varieties taught here are west coast swing and east coast swing. Both of the swing clubs in Kansas City use west coast swing as their standard dance step.

West coast has the benefit of being useable with a wide variety of medium to medium-fast rhythms. It has the drawback of not having the most intuitive steps. East coast swing is easier to learn quickly and can be used for fast to very fast rhythms. Hustle can move even faster. Hustle, east coast swing, jive, Lindy hop,  jitterbug and more names are all generally associated. They share family roots from American culture of the 20s and 30s (notably the Savoy Ballroom in Harlem and Lindy Hop and jitterbug).

Tango is not yet something you are liable to hear in many venues yet although it is enjoying added popularity (and even couple of tango-only clubs in California) among the young crowds as a result of stage shows. The Argentine tango is the new popular variety. It is the original dance, a smooth dance with a feline quality to it, not the staccato style we have seen in the US and in exhibition for years. 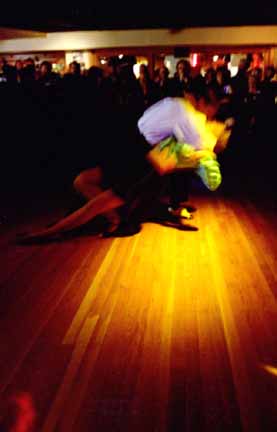 Swing is currently enjoying a strong resurgence among the 20s crowds on the west coast with a lot of activity centered in LA and San Francisco. Both coasts are showing a new interest in swing among the 20s generation. In KC most of the swing crowd still tends to be in their 30s or older.

Ballroom dancing in general is beginning to pick up again. Karen Myers, president of the Kansas City chapter of United States Amateur Ballroom Dancing Association (USABDA) says that local membership and participation has been on the increase. It is common to see from 60 to more than 80 persons at a time taking ballroom lessons at Walter’s. Ballroom is usually an older crowd although some ballroom is picking up on both coasts, again among a younger set.

The Kansas City Swing Dance Club (KCSDC) just recorded their 1,000th member. Earlier this year the Heartland Swing Dance Club was started with just a few initial members. They recently recorded their 100th member. KCSDC has their own clubhouse. They occupy the full basement of a commercial building. Their dance floor is hardwood on a suspension system over concrete with air blown underneath. The Heartland club occupies the nightclub area of Dick Clark’s American Bandstand Grill on Sunday evenings.

Swingin’ at the Savoy (book)
http://www.mcn.org/a/lindyhop/bios/normbook.html

Mike Strong is a programmer writing a graphics conversion program which translates drawings created in AutoCAD (such as "blueprints", engineering drawings) into illustrations which can be used for manuals, ads, presentations, and other needs where the mechanical drawing must be used in a publication.

Following what I call a "therapeutic" burglary which got rid of my television, further followed by a change in work location I dove headlong into dancing early this year. I’ve turned down all offers from very good people with an extra television to give me, free, their extra televisions. I go dancing instead, most nights of any week.