A Modern Night At The Folly 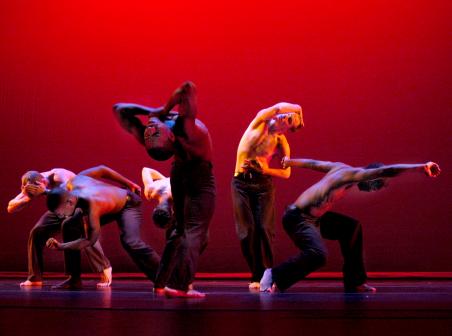 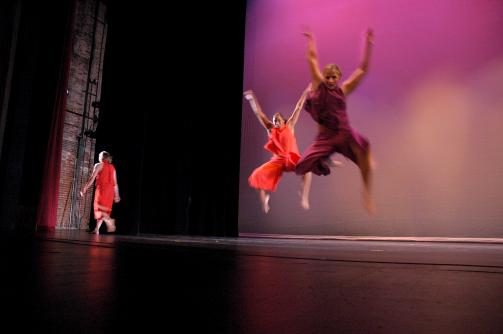 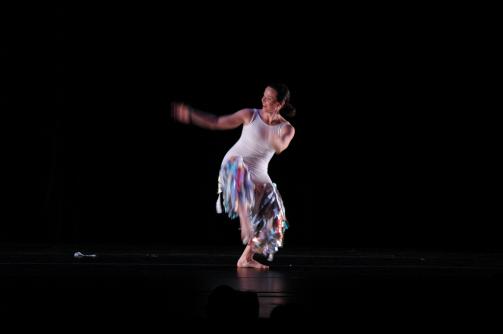 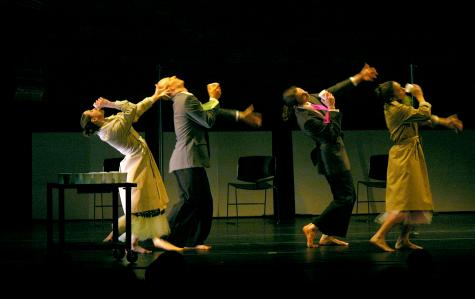 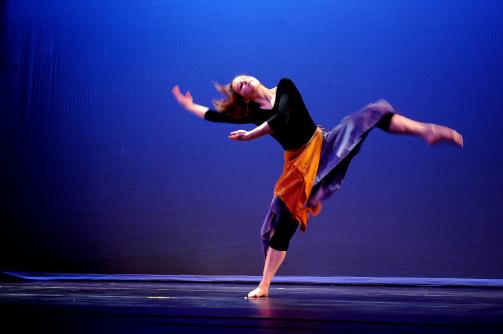 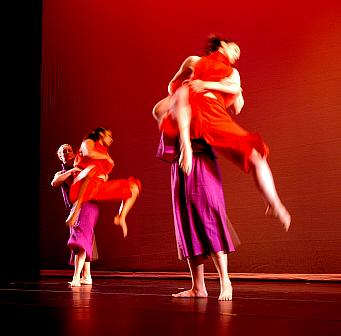 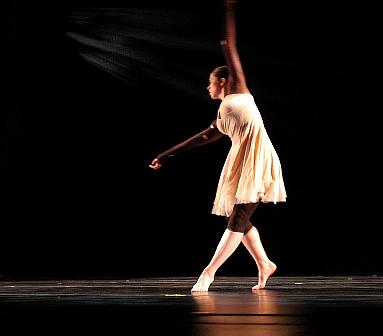 Facades of an Indeterminate Nature 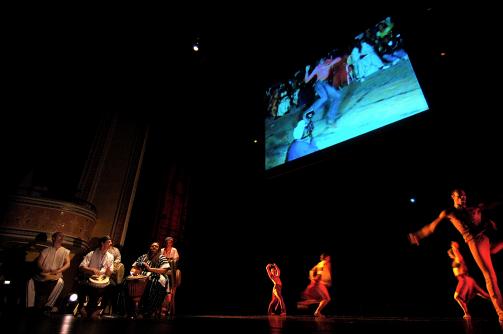 Dance Review
Written for the UNews by Nicole English with a UMKC angle: 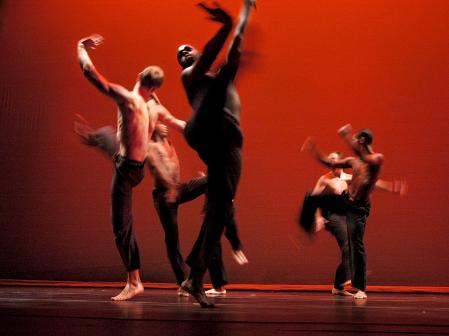 Curtain time was late at the City in Motion Dance Theater annual production of "A Modern Night at the Folly" Theater this year due to the large amount of unexpected walk-ins just before the 8pm show time on Saturday, Jan. 14th. Of the 340 or so attendees, over half purchased tickets at the door and had to be seated. This unexpected development delayed the curtain for a short time, but was a very pleasing development for the performers and producers of the show.

Despite the minor delay, the audience was in store for a delightful and innovative performance. Prominent members of the dance community were all in attendance, including William Whitener of the Kansas City Ballet, Mary Pat Henry of the Wylliams/Henry Danse Theatre, Michael Hogg of KKFI Community Radio, Billie Mahoney formerly of UMKC and Julliard, Lauren Whittaker, Liz Jeans, and David Ollington, choreographer and writer for both eKC Magazine (KCActive.com online) and the KC Star. All had connections with the performers and producers of the show and turned out in support of the performances.

First on the bill was a solo by well-known Kansas City performer and choreographer, Tuesday Faust, who performed her own work to the music of Mum and in a billowy white costume designed by artist Peregrine Honig of the Fahrenheit Gallery. Edgy and innovative, the piece integrated the use of video performance projected on a screen, created by video artist, Nate Bogert. The resulting effect had Faust performing in counter-point with herself. This creative use of integrated video performance was well received with thunderous applause by the audience.

"I loved the interaction with the camera," said Conservatory grad student, Christina Walker. "It was a really interesting piece."

The next number was a repeat performance of a dance piece choreographed by UMKC Dance Faculty, Sabrina Madison-Cannon, titled "Come Together", after the Beatles' song, with music performed by Phillip Glass and Crosspulse. This piece is an innovative, all-male ensemble, featuring Ron Belger (Sophomore), Matt Carney (Junior), Anthony DeCarlis (Junior), Ben Biswell (Junior), Chris Page (Freshman), and Jered Solace (Junior). This performance was particularly interesting to watch because it was performed this time with the addition of a freshman dance student.

"It was an honor to performing at the Folly Theatre, and surrounded by so many amazing dancers," said Freshman Dance Major, Chris Page.

The piece is a brilliant example of male ensemble choreography, so often overlooked in mainstream concert work. It is rough and athletic masculine dancing at some of its best, yet it is emotionally expressive in a bare, gritty sort of way. It gives the impression of rare display of raw male pulchritude.

"It was energetic, yet hypnotic," said KKFI Radio personality, Michael Hogg about the suite. "It draws you in, yet it was very rough and tumble at the same time."

The muscular dancing was also appreciated by the audience which applauded so loudly for so long, that the performers were required to take a double set of bows, which is relatively unprecedented for piece presented early in a concert. The enthusiasm of the audience also inspired the performers.

"It was a wonderful experience," said Sophomore Dancer, Ron Belger. "There was so much adrenaline coming from the audience."

The next dance was a solo titled "Restless Leg Syndrome" performed by choreographer, Michelle Diane Brown, Artistic Director of Kacico Dance, to the music of Edvard Grieg. This was a cute, playful number that was very well received by the youngsters in the audience. Dressed in a white sheath with metallic shimmering fringe reminiscent of a Mid-East Beledi dress, the piece represented someone trying to keep restless legs under control to keep them from breaking out in spontaneous shimmies. The humor portrayed elicited lots of chuckles from the audience.

Next on the program was "Coffee Clutch", choreographed by Susan Warden, Artistic Director of the 940 Dance Company, and performed to music by Verdi. This was a novel melodramatic parody danced by two couples to high opera. This over-the-top fun performance brought much appreciative laughter from the audience.

"We were really thrilled to finally get this production on stage," said Skowronek. "And I was really pleased with everything in the performance."

The next number was a piece by choreographer, Malinda Crump, titled "Work Harder, Stupid", which again featured dancer, Tuesday Faust, along with Bobbi Foudree, Shandi Miller, and Sarah Mermis Payne. This piece had an almost oriental feel in music and movement. The engaging and hypnotic music for the suite was composed by Steve Reich.

Next in the program was a solo created and performed by UMKC Conservatory Dance Faculty, Jennifer Medina. Medina's work typically has a feminist feel to it, as did this piece. First performing to folk guitar music, Medina transcended into expressive moves to gospel music that was reminiscent of her ensemble work. The piece got the audience wound up and they expressed their enthusiasm for the work in loud applause.

"The performance felt great," said Medina later, despite feeling poorly earlier in the day. "And I was so pleased with the positive response... we were so shocked that everything went off so well...!"

The last number was another creative use of multimedia and live performance. Titled "Frauala" and performed to live music by the local Djembe Kaan African Percussion Ensemble, this was a beautifully executed suite choreographed by Kansas City Ballet member, Keelan Whitmore. This piece premiered at the Priest of Pallas Ball, in Union Station, on October 14, 2005. Whitmore not only choreographed, but he performed in the piece, along with other members of the Ballet, Kimberly Cowen, and Catherine Barnickel, Mathew Powell. The dancers appear courtesy of Kansas City Ballet. The innovative use of live camera featured multimedia artist, Anthony Magliano and live video operator, Adam Seitz.

Dressed in red loincloths, these excellent dancers presented an intense, in-the-moment, organic performance that almost overwhelmed the senses. The choreography had drama and interesting interaction with the live camera projected on the screen overhead. Usually multimedia performances seem merely additive props, but this performance intelligently integrated the media in a novel way, with representation of the dance presented along with the live performance in real time, intersected with cut-ins of edited pieces, giving a surreal, yet heightened experience. Adding more elements does not always add to a performance, but in this case, the components were solid and self-sufficient, yet integrated, making for a strong interactive final product.

A number of patrons expressed their admiration for the program at the reception after the concert.

"There were some really great pieces this time, with some heavy and intense music," said Conservatory grad student, Christina Walker. "This concert was very different from the previous ones... but it was a great show."

This admiration was reflected by the experience of the performers themselves.

"We were so glad to be a part of this concert... everyone is so nice," said Medina. "We would do it again anytime."